Everything You Ever Wanted To Know

The Chordbuster Barbershop Chorus was formed in 1952 as the Davenport, Iowa Chapter of the Barbershop Harmony Society (BHS). We are one of over eight hundred chapters located throughout the United States and Canada. The total BHS membership exceeds twenty-nine thousand, making the Society the world's largest male singing fraternity. The Society was formed to preserve barbershop harmony as an original American musical artform. Its motto is "Keep the Whole World Singing."

We are a group of men who love to sing and harmonize in the barbershop style while entertaining our audiences and putting smiles on the faces of our fans.

We meet regularly at the Five Points Wellness Center (formerly Johnson Elementary School) in Davenport Thursday evenings starting at 6:30 pm. We provide a safe environment where young boys and their dads can gather with us to learn and sing barbershop music together.

Under the direction of Michael Callahan and two assistant directors, the chorus and quartets regularly entertain a wide variety of audiences. Perhaps you heard us singing the National Anthem at a ball game, the annual Christmas show and local nursing/retirement homes, singing valentines to lovers of all ages, or the annual show called “Holliday in Harmony.” We also performed for the Governor of Iowa, President Ronald Reagan and the Quad City Symphony.

The Chordbusters proudly support charitable causes, including Harmony Foundation, the YMCA and Davenport Y programs for children Camp Abe Lincoln, Toys for Tots, Churches United food pantries, Quilts of Valor, local school vocal music programs, and others. We support and sing at every Honor Flight when they return. 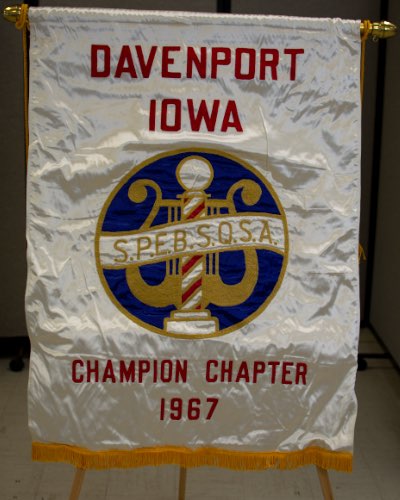 To promote and encourage four-part harmony and good fellowship among our members. To serve the musical needs of all members by providing and supporting a wide variety of barbershopping opportunities which shall include group singing, organized quartetting, pick-up quartetting, woodshedding, tag singing, and musical technique instruction. To encourage and promote education of our members and the public in music appreciation. To promote and participate in charitable and youth projects. To promote public appreciation of barbershop harmony. 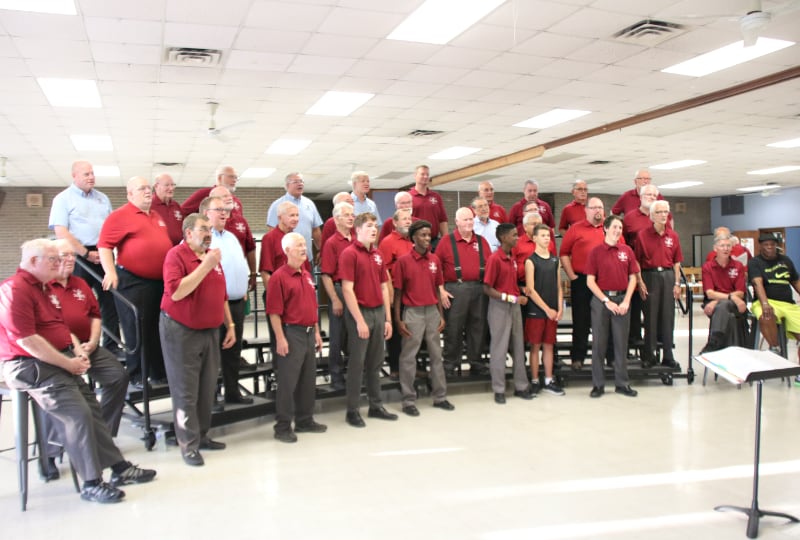 The ChordBusters will be recognized in our area as a quality choral group, commonly bound by our love of four-part barbershop harmony, where ordinary men produce extraordinary music. Our membership will grow and thrive because we exhibit a brotherhood of belonging, a tradition of sharing and seeking musical excellence, and pride of accomplishment. 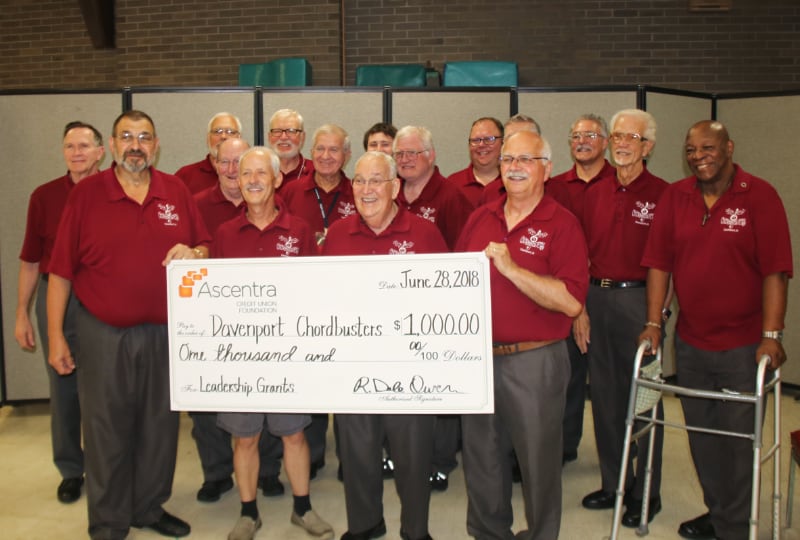 The Society aspires to preserve for its members and for all future generations of prospective members the sacred right of people to seek haven from the burden of the daily cares through indulgence in old-fashion vocal quartet harmony, and to that end we do hereby solemnly pledge ourselves to abide by the precepts of the Code of Ethics.

We shall do everything in our power to perpetuate the Society. We shall deport ourselves and conduct the Society’s functions in such manner as to reflect credit upon the Society and its membership. We shall conform in all respects to the bylaws of the Society and the rules from time to time promulgated by its Society Board of Directors. We shall accept for membership only congenial men of good character who love harmony in music or have a desire to harmonize. We shall exhibit a spirit of good fellowship toward all members. We shall refrain from forcing our songs upon unsympathetic ears. We shall not use our membership in the Society for personal gain. We shall not permit the introduction of political, religious or other similar controversial issues into the affairs of the Society. We shall by our stimulus to good music and vocal harmony, endeavor to spread the spirit of harmony throughout the world. We shall render all possible altruistic service through the medium of barbershop harmony.

Video By Cindy and Amos Glanz

The Chordbuster Barbershop Chorus charter was approved in 1952 with thirty-three enthusiastic men wanting their own chapter. The Society for Preservation and Encouragement of Barbershop Quartet Singing of America. Known as S.P.E.B.Q.S.A.. At the same time they developed a strong relationship with the Davenport YMCA family now known as the Scott County Family Y. The Chordbusters have been a strong supporter of Camp Abe Lincoln and continues to do so today.

The annual Holiday In Harmony shows began in 1956 and have continued to today. Our 62nd consecutive annual show is a salute to those who serve, and the program is called "A Night To Remember."

The first chapter director was Floyd Connett who was an accomplished arranger. He arranged My Wild Irish Rose, Down Our Way and Shine on Me and were published in the Just Plain Barbershop society manual. And all continue to be favorites even today.

Following Floyd in 1956 was Howard Mesecher who also was an accomplished arranger. Howard was director for 17 years and is the name sake of the Howard Mesecher/Hall of Fame Award given for excellence and service to the chapter. Since 1973 Larry Monson, Gary White, Dan Warschauer, Dick Rode, Harry Swarts, Andy Sauder, Joe Millett, Jay Krumbholtz, Dean Sellers, Debra Ragan and Michael Callahan have directed the chorus.

The S.P.E.B.Q.S.A., now known as The Barbershop Harmony Society, has always encouraged quartets to form and has been a big part in the chapter’s success and compete in the district competition. Some of our quartets were Hub Bubs, Sound of Music, Sound Connection, Seventh Encounter, Four Bits, Possible Side Effects, Da Guys, Four Fathers, Tonal Insanity, Chords R Us, A Touch of Fun, and many others. An additional group within the organization was formed to fill in at area churches during the Summer called "The God Squad" and was directed by Roger Wiese.

In every Chapter, there is a focus the preservation of vocal music in our schools. The Chordbusters actively look for ways to help preserve vocal music by hosting youth music efforts most recently Octopluzza a society sponsored event to bring young people in to help them become better singers and learn about the Barbershop style of harmony. The Chordbusters were invited to participate with Real Men Sing where three hundred Jr. and Sr. high boys gathered at the Adler Theater for a day of intense music closing with a finale of three hundred young boys with The Chordbusters participating with them.

No chapter can enjoy success without the support of their wives and the Davenport Chordbusters are no different. The wives organization, called the Chord Jewels, play a very important role. They are faithful supporters and are always willing to lend an ear, or help with makeup and costumes. In addition, they meet weekly during chapter rehearsal and sew quilts for children in need. We couldn’t do what we do without them.

Throughout the 60+ years of history. We developed long-term relationships with our fellow singers as well as entertained thousands of people and became better performers along the way. 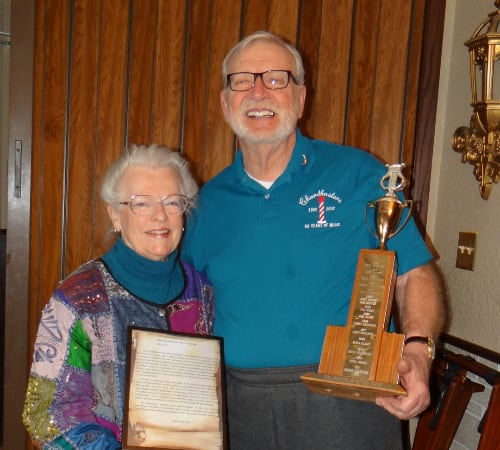 We Honor Our Own

Our 2017 Barbershopper of the year, Morris Merle, receiving his trophy. 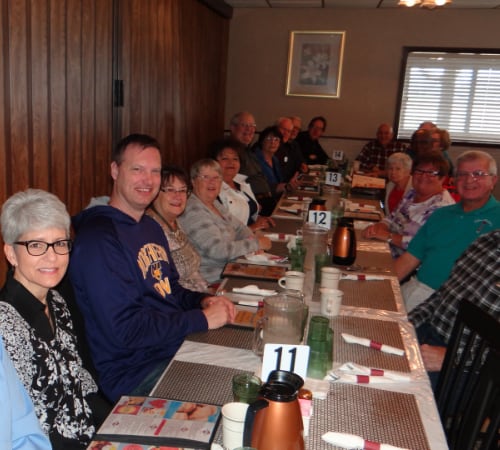 It's a Family Affair

Annual breakfast for the Chordbusters and our families. We like to gather around food. 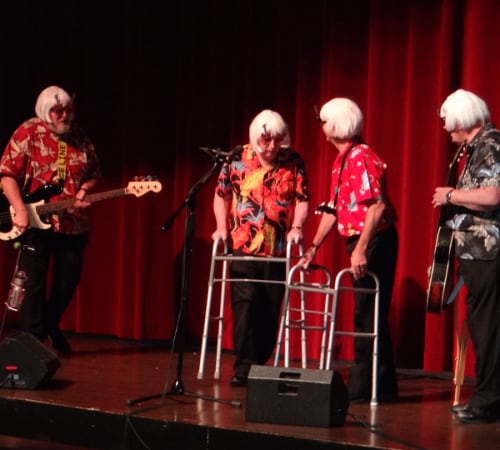 We DO Have Fun

The Four Fathers performing before an audience is always a good time.